V3.5 - Reworked details around the commercial terminal, including the car parking area, the curb drop off, folliage and aircraft parking textures.

V3.4 - Added details throughout the airfield.  FIxed some issues that I think were from WU10 elevation changes.

So, with this version, there are no longer any google models in this scenery package.  I recommend you delete KPAE V2.91 or older, restart MSFS2020, exit MSFS2020 then install V3.0.  This will clear up about 10MB of data from your harddrive.

V2.91 - I finally figured out what the issue was with the static Boeing airplanes and have removed the color enomolies (turned out to be a normals issue).  WIth that issue being fixed, I could add a shiny finish to each model.

Additionally, this version was cleaned up to remove no longer utilized assets (the old google models).  I recommend you delete KPAE V2.71 or older, restart MSFS2020, exit MSFS2020 then install V2.8.  This will clear up about 7MB of data from your harddrive.

V2.71 - Fixed error associated with blender scaling, causing the objects to load in late.  This update sets the blender scale to 1:1, allowing assets to spawn in sim at normal distances.  Also fixed the textures on the composite wing building.

V2.6 - Updated to correct for any modellib.bgl conflicts

V2.5 - Updated scenery to correct some issues created from the US update.  Added a few more cars randomly throughout the airfield.

This will probably be the last update of this package.

V1.0 - Scenery enhancement to Paine Field (KPAE) in Everett WA; home of the Boeing Everett factory, the largest building in the world by volume.  Enhancements include:


Stay tuned as I am planning more updates in the near future! 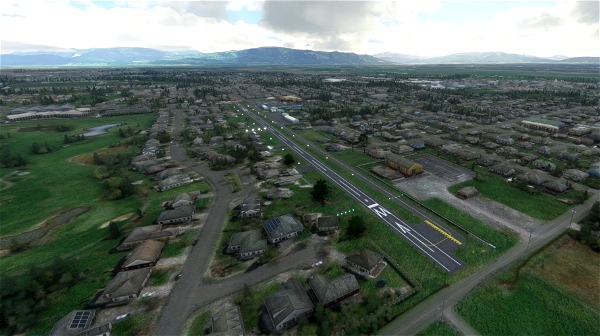 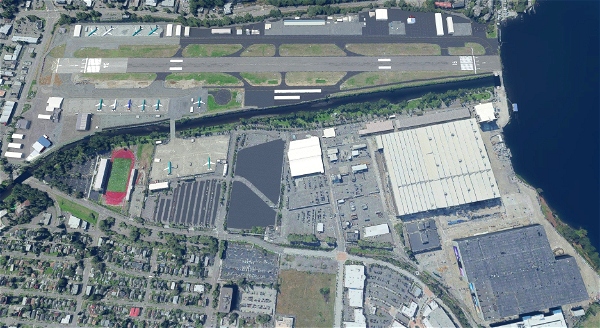 Create a free account now to be able to to keep track of your mods and their latest updates without struggle.

Nice work! Great attention to detail and appreciate the effort! It's easy to remove the 12th idiot garbage on the paint barn, otherwise thank you and GO PATRIOTS.

Also is i should repeat myself... but... thanks a lot for your continued love for this great scenery!

Yay, it looks like it'd be worth the effort to add the Flying Heritage Museum! Much to my surprise after Ferengi Ventures decided to sell it off, the new owner's going to keep the collection in Seattle!

v3.4 new building that doesn't exist IRL. This brown building with white pavilion top on the south side isn't there in real life: "https://1drv.ms/u/s!Am3UH_kcAxmjkIx6ieThBuJHwkyFLg?e=XzGnDm"

Any chance to get PAPI lights and windsocks on 34R/16L now?

Not sure what building you're referring to, but everything I have added does exist. So what you're seeing is AI generated.

Sim Update 10 is not live and this airport has not been verified for that yet. You are in a beta right now. This airport and buildings work just fine right now.

Just dowloaded the last update, please fill the path with static planes, and put some Boeing historic planes there too and the new B777x! Nice job friend, always looking foward for your work!

Thanks for your great work, polishing this nice airport further and further.

Seriously such a good job here. Always loved your airports and scenery. What a good rendition of a popular airport.

Thanks for making stuff for the PNW by the way.

This is a well-done scenery and is an accurate one since I usually fly around PAE in real life. However, one issue I have is that whenever I am doing an approach or landing, the runway and taxi lights are floating above the runway and taxiways, making it very odd as I am landing at night. The same issue happens in the RNT scenery. Is there a fix you know of, or is it an add-on I might have installed?

Can you provide a screenshot?

I have a screenshot but I can't seem to find an attachment function on here. Do you have an email I can send it to you on?

Regarding floating lights, it's a core sim issue. Probably caused by SU6 when MS updated some elevation data for North America. They have said they plan on swinging back to the US and do another scenery update with their latest BING data, so maybe it will get fixed then?

Beautiful work! A well earned "5" from me. We plan to set sail on a cruise from Seattle to Alaska next June and I am starting to explore that area in MSFS. This will be a great base to work from. Oh but do I wish though that someone would model some open hangars. MSFS airports look so lifeless with all of them closed up!

The airport scenery is magnificent, but the addition of static aircraft in the parking spots is not a good idea. Spawning somewhere and you end up inside another plane. Parked aircraft are a job for the AI system and not part of scenery. At least pls give an option to exclude them. Thanks!

Maybe it´s possible to delete those spots for the flightplan map, where scenery planes are positioned. This way it would be avoided to accidentally spawn at an position which is already "occupied" by a scenery plane and the addon still would benefit from having some planes positioned for a good immersion.

This is awesome! Love the details and the LCF!

One small thing: could you please remove the ANA and Emirates static plane parked at the two gates connected to the terminal? IRL only these two gates are serving passengers and it is kinda annoying to spawn at these two spots now since the player's plane will overlap with the static plane.

That is not a passenger terminal It's the Boeing Everett Delivery Center. Those stalls are for airplanes that are about to deliver.

ah... you are right! my mistake. Thanks again for creating this.

This is compatible with SU5 and HF# 2 it works and it is nice to have...Thank you!

Is this compatible with Drzewiecki designs Seattle landmarks?

I don't know. I think somebody in the past has said it is, but I cannot confirm.

Wow, awesome! Thx for your work! I really like it! It looks great!

1 year(s) ago
Love, love this airfield. I fly in and out (mostly out) of here all the time. My only complaint, if it even qualifies as that, is that you have to be careful where you park, because the static airplanes don't disappear if you decide you want their spot!

Is it possible to make them go bye-bye if you pick their slot? Or if not, can you at least publish which spots/gates are available for use without co-occupying the space with a static plane?

Other than that, like I said, I love it, very professionally done. Could be released as payware and get good ratings even with that level of scrutiny.

I also second the request for KBFI, and I'm looking for a volunteer to do KTTD, where I was once based. I'd do it myself but I have zero clue how to do so!

Great job overall! It would be 5 stars instead of 4.5 if not for the parking issue...

2 year(s) ago
After the last MS update 1.14.5.0 I experienced a strange treshold of about 3 or 4 feet deep just behind the blast fence parallel at Rwy 16R-34L. If I taxi toe 16R the plane falls down. Strange effect. Has that to do with the update or is it something in my PC?

Nothing on your end. The terraforming tool in the SDK is wonky as heck. There is a seam in that area that flattens the Boeing flightline and tries to blend with the stock terraform. It's not perfect, but that is extreme. I'll go check it out.

Thanks, I await your update.

I took a look. The current version is as good as it can be for now without risking messing up the actual taxi way terraforming. As the SDK improves, I can circle back to it.

2 year(s) ago
Thanks for your great work on this mod! Any chance you could do the same for Boeing Field in the future? That is going to be my home airport for training and looking forward to eventually seeing it in full detail!
0
0
Reply

A few folks have requested KBFI. I might someday, but I'm getting a little burned out at building blender models, and the prospect of starting a new airport seems daunting right now. Personally, my goal is to complete updates to all the FED hubs such that when TDFi releases their MD11 or PMDG releases their 777, I'll have the FED network ready to go as I am a big freight dawg fan.

2 year(s) ago
Thank you for enhancing the airport. This is my home airport and I teach and fly out of here. So it's fun to experience it in the Sim.
1
0
Reply

How close to reality did he get it? Don't get me wrong, I LOVE the mod, and am about to give it a high rating myself, but I've never been to the real KPAE so I can't make that sort of comparison.

These add-ons may be required or recommended to use.

Du bedes klik her for at logge ind først.

Why is this file hosted external?
There may be several reasons. Mostly, we have not yet been able to contact the owner of this file and ask him or her for permission to host the file on your own servers. Maybe the legitimate author does not like his file to be hosted elsewhere. Legally, we are only permitted to host files uploaded by the author himself or with explicit permission to do so.

The link is broken or not working?
Unfortunately, files which are not hosted on our servers are beyond our control. Please use the "Report" button on the bottom right of this page to report dead links and we will try to fix it. Thanks for your understanding!

We kindly ask you to understand that we cannot process copyright requests through this form, as we are required to receive such correspondence in the form of a formal complaint to comply with the Digital Millennium Copyright Act. Please familiarize yourself with the DMCA procedure and send us your notification to the address below. Please note that incomplete or invalid complaints will not be processed.

In accordance with our policy, we respond to notifications of alleged copyright infringement that comply with the Digital Millennium Copyright Act on the U.S. Copyright Office website and other applicable intellectual property laws. Our response may include blocking access to or removing allegedly infringing material and/or terminating accounts. If we remove or disable access to material as a result of such a notification, we may notify the owner or administrator of the affected content to provide a counter-notification.

Wow! Klar til at dele.